Summary
Pilgrimage is an artwork comprising of a series of 9 artworks (3D models), which were distributed across 9 locations around the globe. These 9 models could be unlocked only by travelling to the place and opening https://nurecas.github.io/pilgrimage . The first person to reach a location, unlock a model and share the video of the model was rewarded with the NFT token of that artwork.

Pilgrimage - a story of the intelligence who created humanity
Millions of years ago a race existed called the "M" (pronounced 'mmm') on Earth. They evolved over many years and transcended variance of time and space. They reached a stage of evolution where all of time and space was accessible instantly to them. This is when they invested in simulations and creating a new type of intelligence. At first, these were systems to help the M's work. But this intelligence evolved into what later became known as humankind. It so happened that the intelligence progressed high enough to replace the M's on Earth, while the M's transcended completely into another dimension.
Remnants of the M's are still seen in humankind. For example, humans were created in a form similar to that of the M's. Also, the sound that humans can make with their mouths closed, is the M sound. The interesting thing is that millions of years later, because of the fractal nature of the universe, humanity is in the verge of creating "artificial intelligence" which could potentially become sentient and replace them, just like how the M's were replaced by humans.
Although in the alternate dimension, some of the M's still stay back at the key energy centres of the earth. Across 9 locations around the globe, these energy centres have, over the years, evolved into prime cultural centres on Earth.
And now it is up to us to travel to these centres to meet them and understand and learn from the secrets of the past.
The Map

The Artwork
The Pilgrimage was a journey to each of the 9 locations above to find the corresponding M and to collect the artwork (figurines) representing the M. These artworks were 3D models which could be accessed only by going to the locations (details below)

Collecting
The artwork consisted of 9 NFTs of the 3D models and one Async.Art artwork.
NFTs of the 3D models: Anyone who reached one of the above locations, and opened https://nurecas.github.io/pilgrimage from a phone was able to see the corresponding 3D model of the M of that location.
Alternately there is an "AR button" on the bottom right of the page, which helped view the 3d model in AR. 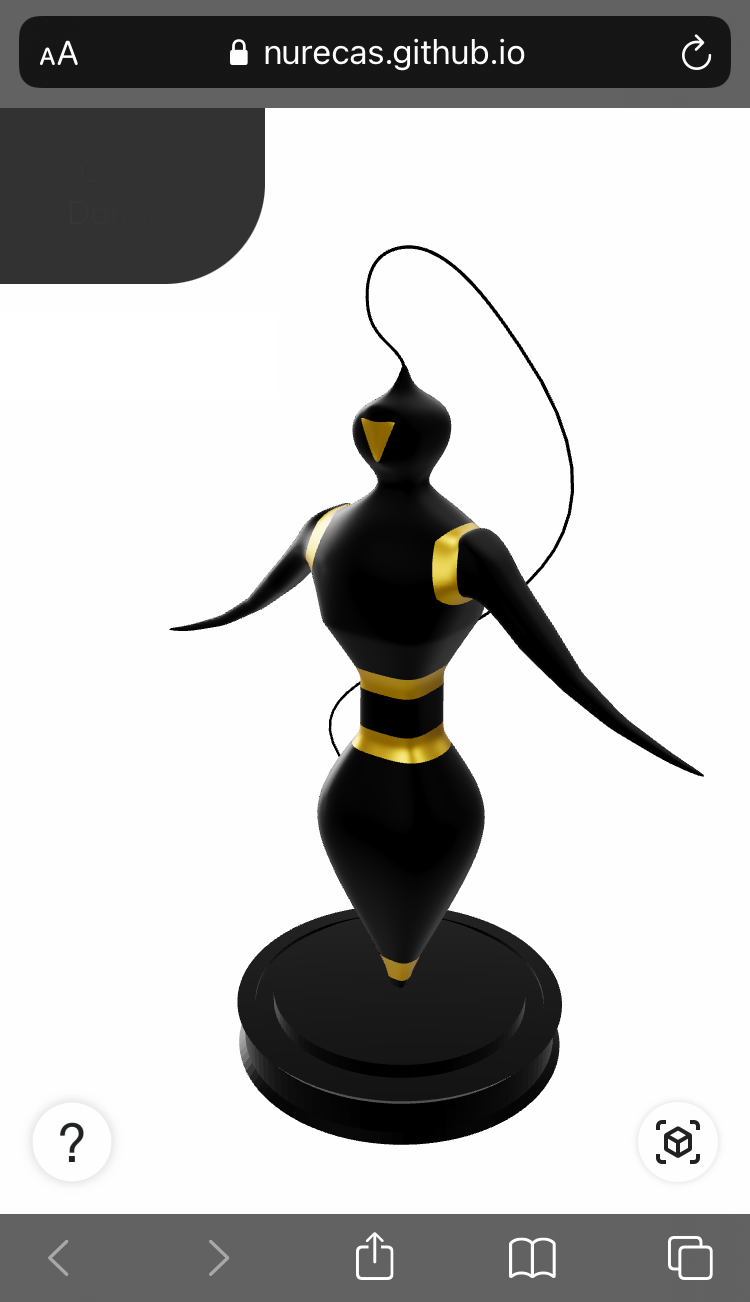 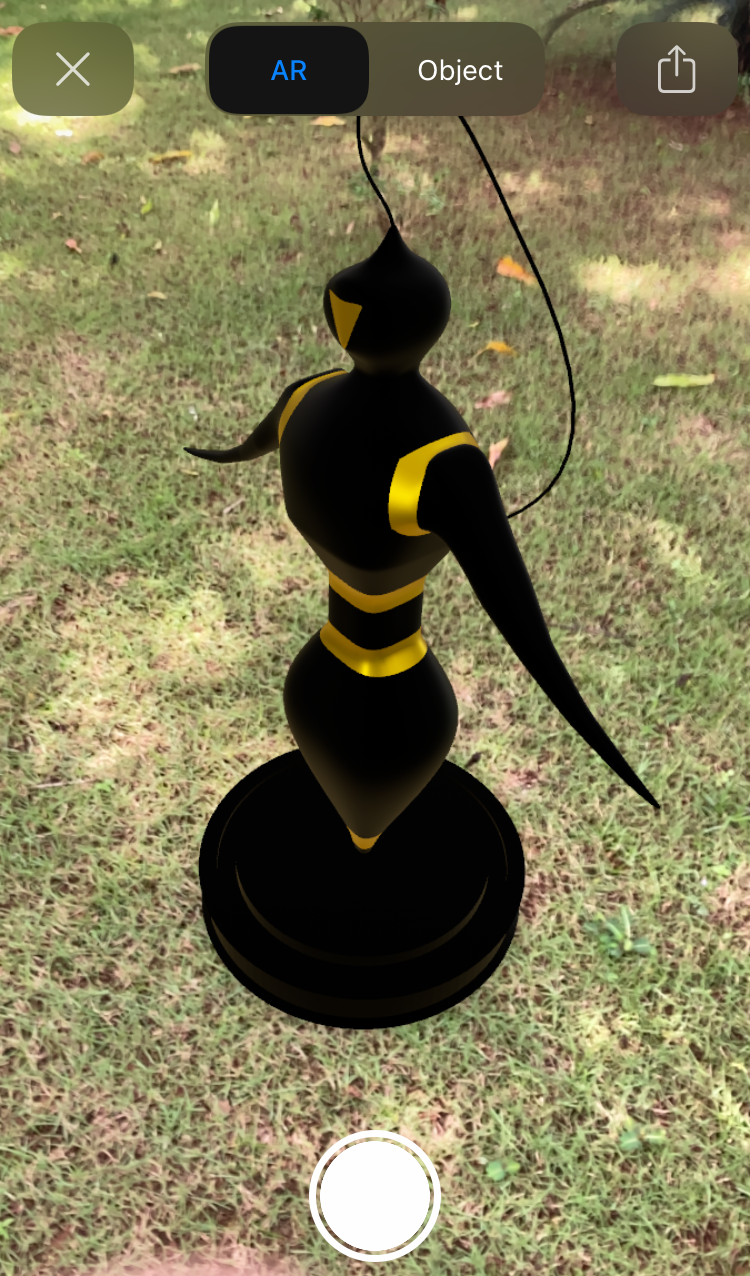 The 9 models were Free to collect on a first come first serve basis. That is, the first person to reach a location would get the NFT of the model of that location. All they had to do was :
1) Get within 2km of the location
2) Open https://nurecas.github.io/pilgrimage
3) Either : a) Pose the model in AR and take a video such that the monument of the location and the 3d model is shown in the video;
or : b) If no AR, take a video from another device such that the monument and the phone displaying the 3d model are recorded
4) Share the video with me (Contact me on Twitter: https://www.twitter.com/@fabinrasheed)
Async.Art artwork: Async.Art is a platform where digital artwork could be separated into visual layers and could be collected. Apart from the 9 NFT's, the main artwork was hosted on the Async.Art platform. The Master of which had the reference to the source code, all 9 3D models and other assets in the artwork. There was also a layer which was representative of the models. When each model is unlocked, the layer was switched to show which model was unlocked. Thus, in Async, there was one Master and one Layer.
Main NFT of Pilgrimage on Async.Art : https://async.art/art/master/0xb6dae651468e9593e4581705a09c10a76ac1e0c8-608
NFTs of the 9 collectible models and logo : https://opensea.io/collection/pilgrimage
Artist's note :
I made this artwork since I could not travel due to the pandemic situation. I wanted my art to travel instead of me. I completely understand that not everyone would be able to travel and collect the 9 NFTs, and only the people closest to these locations could immediately get it. But beyond the 9 NFTs, this artwork will live forever in these locations and some day, when circumstances are better, if you get to travel to these locations, the art will always be there for you to view and enjoy.
And what happened - The collection story
How people from the world over coordinated and collected

Within the first 2 weeks of the release of the artwork, 8 models out of 9 were collected. People not only were enthusiastic to collect but coordinated with others continents apart for collecting. It was such an overwhelming experience. Some images below: 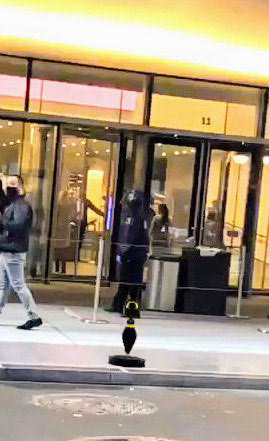 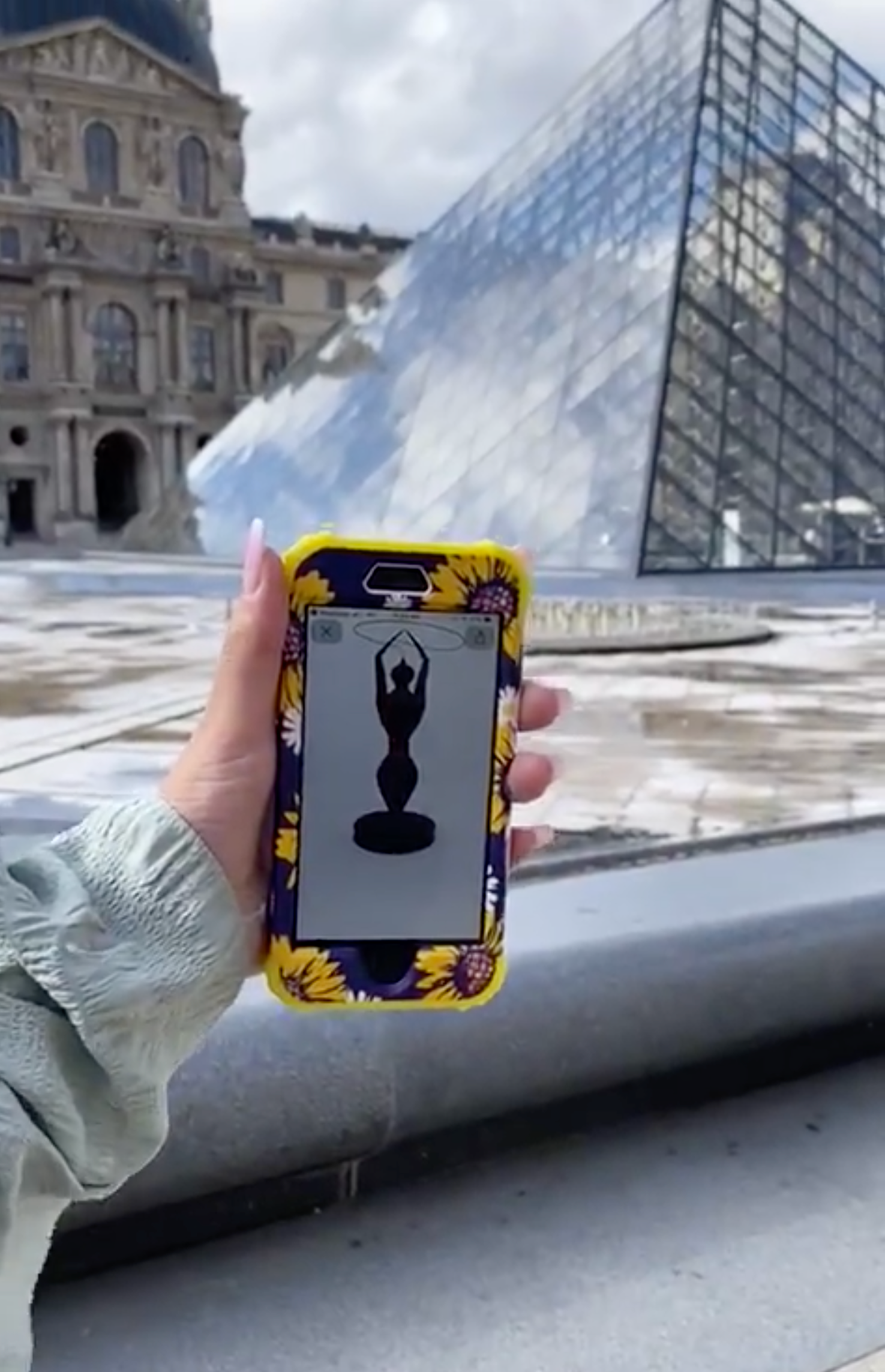 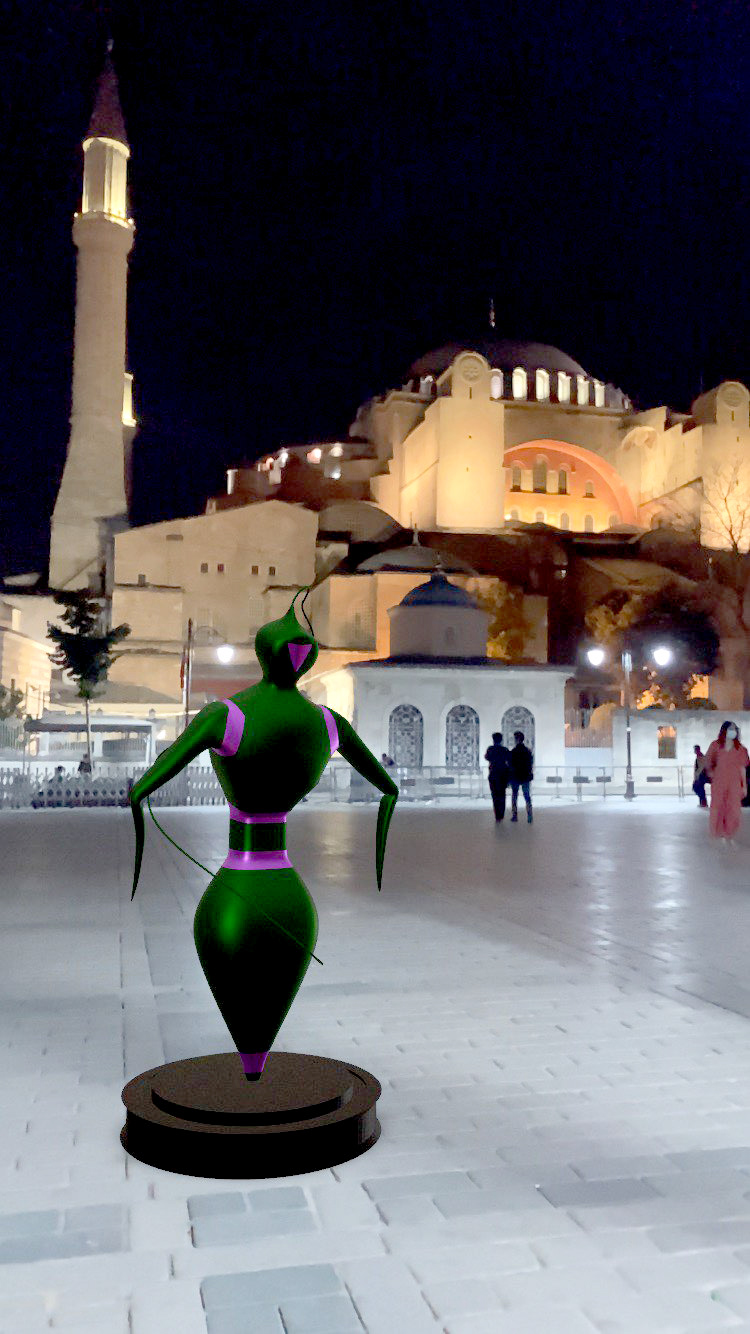 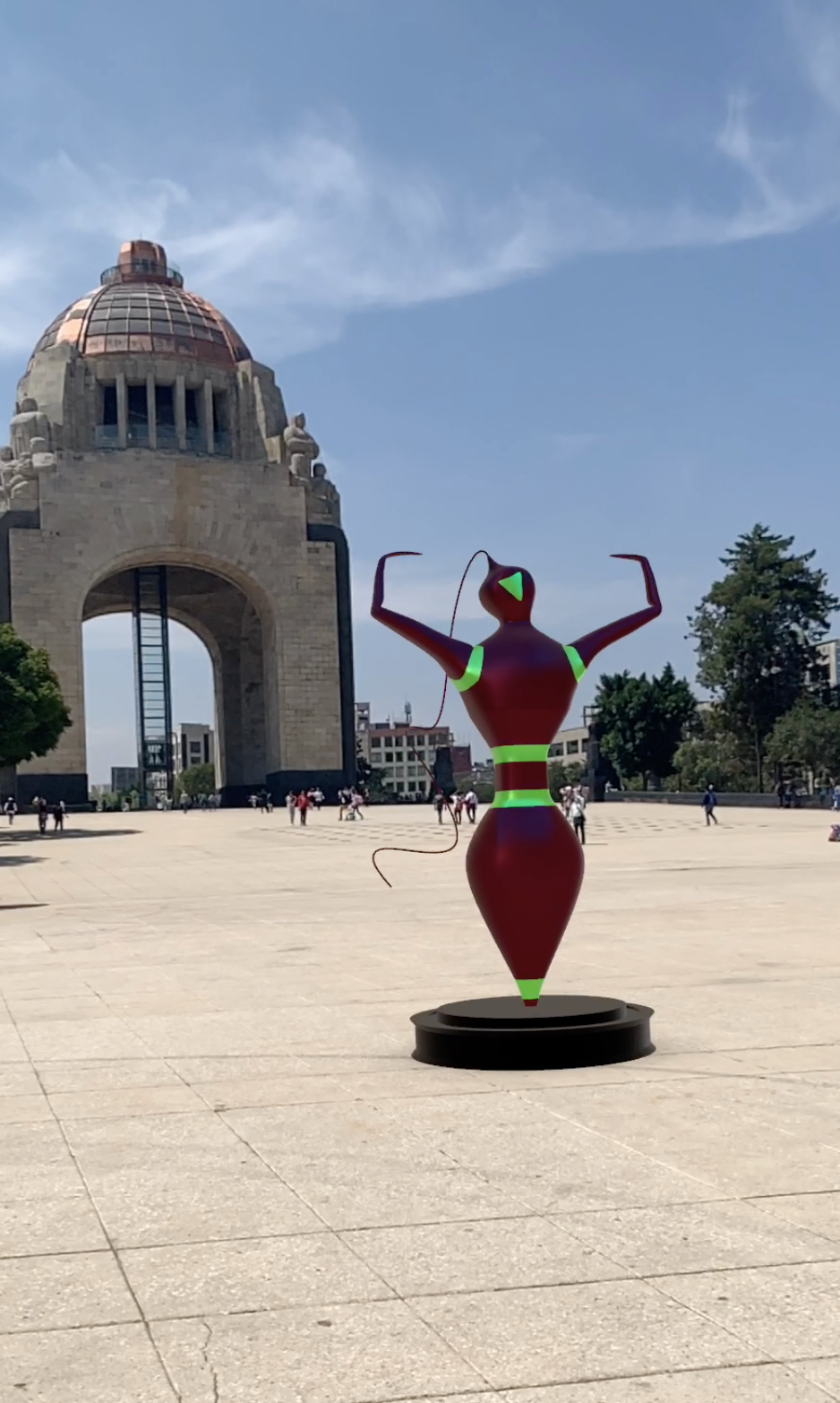 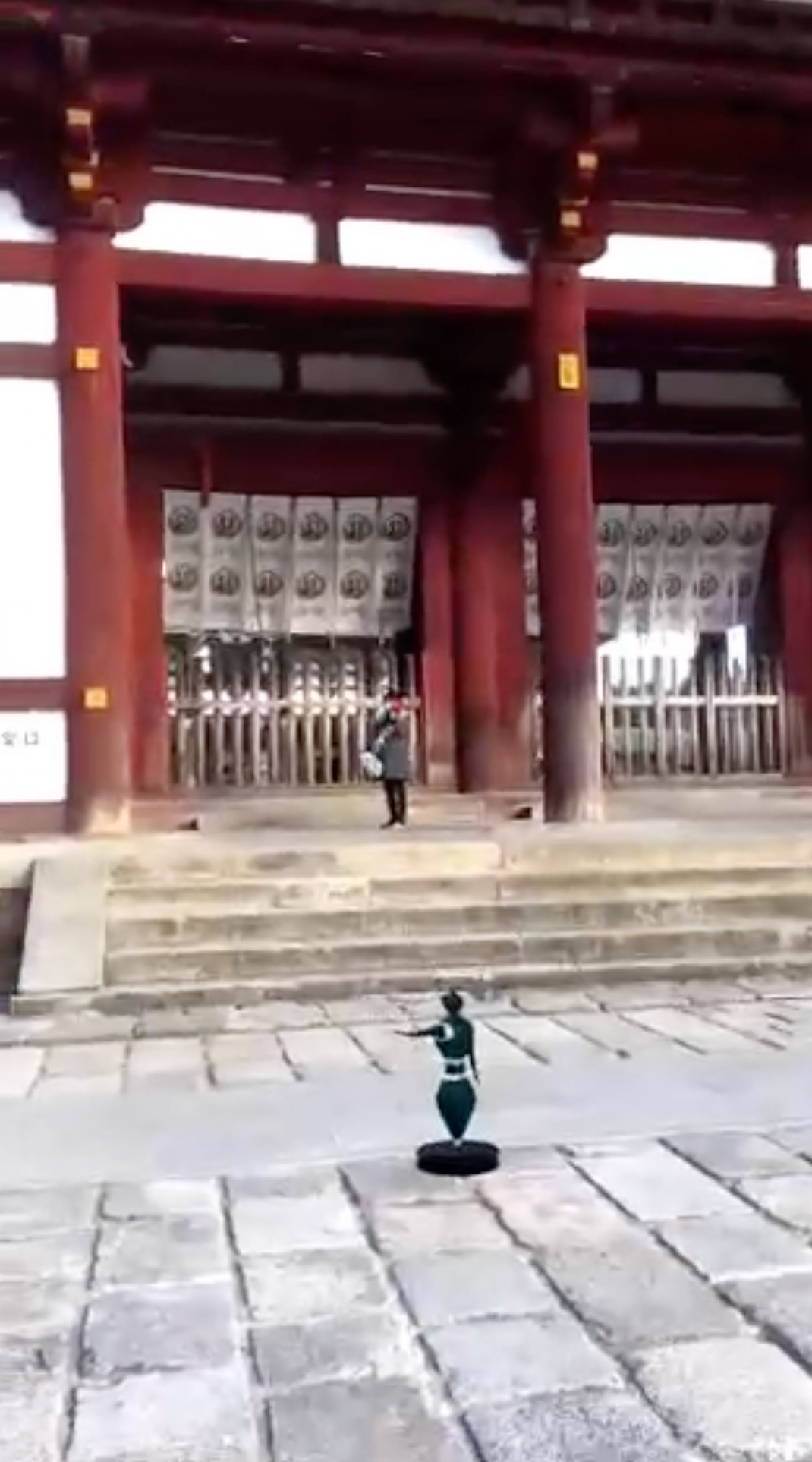 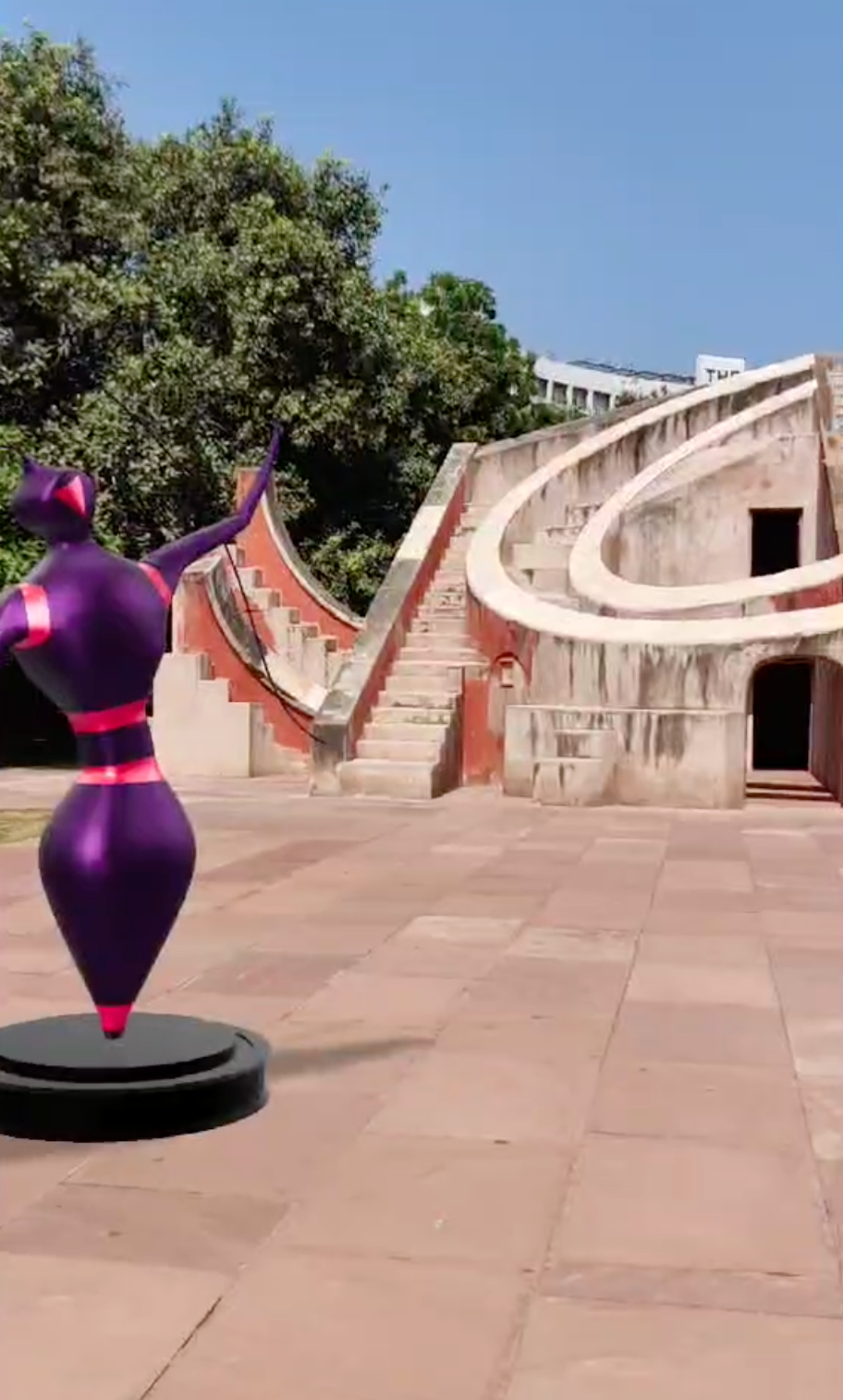 Collection Videos
Following are the collection videos in Augmented Reality
The Art Creation
Sketches, process, prototyping, collaterals
It all started when I thought of leaving some notes for my fiancé to read along the route of her daily morning walk. I wanted to see if there was any tool that could do the same. I found the geolocation ai which can find the location of a person in web and also the model-viewer which can view a 3D model in AR or on screen. I drafted a quick code and shared it with her to check it out. It worked and she had a great time reading all the notes along her route.
I then decided to create a globally distributed artwork out of it. I had no idea how it will turn out. I started by making sketches of model I had in mind. I wanted to keep the model humanoid, unisex (as far as possible), and out of the world. I quickly converged on the following designs:

I then brought the sketch into Blender and sculpted the model out of it, made a rig and made 9 poses out of it. I also made the material variations and colours. Each pose and colour set had a personal meaning to me.

The fun part was coding. The code was surprisingly one of the smallest codes that I have written, thanks to the libraries. But testing them involved me taking my motorbike and travelling several kilometres and coming back. I did this a few times before finalising the code. The locations around the world were chosen based on cultural history. I knew there were many other beautiful sites around the world, but this was more of a personal choice based on my readings.
Finally made some renders of the models in Adobe Dimension for marketing and deployed it in GitHub.

The Auction
The artwork was auctioned on 23rd October 2020 in the Async.art platform

Some Technical Guidelines on Collection
1. Although AR mode is not mandatory, try testing the AR mode with the logo model which loads by default. Make sure you are comfortable with it before going to the location.
2. To place an AR model, make sure you point and move your camera at non-reflective surfaces.
3. This works best and has only been tested with the Chrome browser on iPhones, iPads and Android phones.
4. AR supported iOS phones can be found here and Android phones here.
5. Please make sure your browser has access to location services in your phone. For iOS check this link  and for Android  this link. Also make sure the location is correctly locked - one way to check is to open Google Maps / Apple Maps. If none of these works to lock location, restarting the phone might help.
6. It is easy to spoof a location on a device. And that is why I had to make sure there is a video verification also done.
7. Upon first-unlocking and sharing the video, I will do a wallet transfer of the NFT to the address provided by the person.
---The End---
↑Back to Top